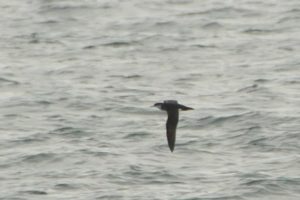 The Manx Shearwater (Puffinus puffinus) is a medium-sized Shearwater in the seabird family Procellariidae awidespread group containing nearly 100 species of medium to large seabirds. They have long, narrow wings and the characteristic “tubenose”. The Manx Shearwater has the typically “shearing” flight of the genus,dipping from side to side on stiff wings with few wing beats, the wingtips almost touching the water. This bird looks like a flying cross, with its wing held at right angles to the body, and it changes from black to white as the black upperparts and white undersides are alternately exposed as it travels low over the sea.The Manx Shearwater is entirely marine, typically flying within 10 m (30 ft) of the sea surface. It nests in burrows on small islands which it visits only at night and these nesting colonies are in the north Atlantic Ocean in the United Kingdom, Ireland, Iceland, the Faroe Islands, France, the Channel Islands, the Azores, Canary Islands and Madeira. The most important colonies, with a total of more than 300,000 pairs, are on islands off Wales, Scotland and Ireland. Three-quarters of the British and Irish birds breed on just three islands; Skomer, Skokholm and Rùm. Around 7000–9000 pairs breed in Iceland with at least 15,000 pairs on the Faeroes. Other populations are of at most a few hundred pairs. Although this species’ population now appears to be declining, the decrease is not rapid or large enough to trigger conservation vulnerability criteria. The breeding colonies are deserted from July to March when the birds migrate to the south Atlantic, wintering mainly off Brazil and Argentina with smaller numbers off southwest South Africa.The journey south can be over 10,000 km (6,000 mile), so a 50-year-old bird has probably covered over a million km (600,000 mile) on migration alone. The migration also appears to be quite complex, containing many stopovers and foraging zones throughout the Atlantic Ocean. Manx Shearwaters are able to fly directly back to their burrows when released hundreds of kilometres away, even inland. They are able to detect the Earth’s magnetic field and hence navigate back to their colonies. The details of how birds interpret the magnetic data are not fully understood, but tiny crystals of magnetite around the eye are involved in detecting the field.

Image by B. Farquharson